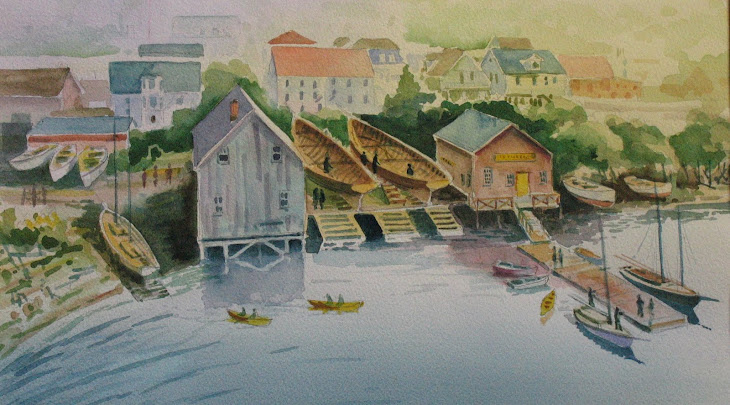 Below decks with Billy Campbell 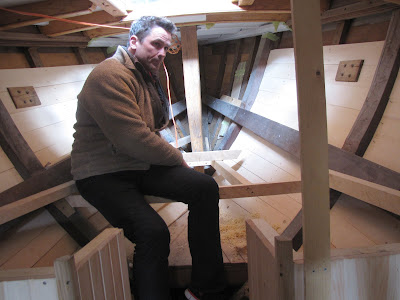 Actor/adventurer Billy Campbell made a flying trip to Lunenburg on the weekend to help finalize below decks arrangements for his schooner. 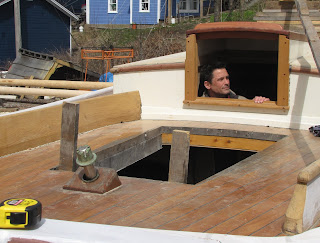 Billy, who is currently filming season two of the hit AMC series The Killing (and whose character got shot in the season opener - gasp!), spent Good Friday travelling to The Dory Shop where he met with Dave and Capt. Dan. He also managed a brief visit with his excited shipmates aboard the Barque Picton Castle before boarding a jet plane for the return flight to Vancouver. He was due back on set Saturday morning! 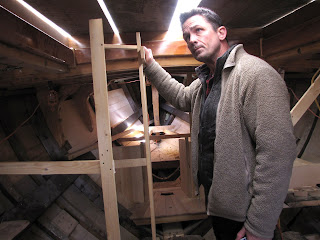 The design for the below decks on Billy's schooner is very simple and open. There will be no real cabins here, but rather big bunks and settees that will make it a sociable craft to sail in. Blond woods and an open layout will keep things airy and well lit, and evoke the feeling of old-time fishing schooners. 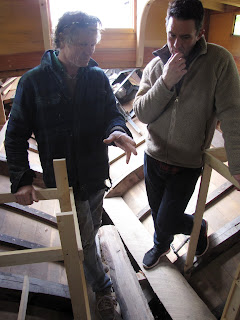 He also wants to keep systems to a minimum. So water will be kept in barrels; there will be kerosene cabin lamps, hand pumps and so forth.
To walk you through: heading down the companion ladder, you'll have a fine stand-up galley to starboard and a navigation station and chart table to port; both immediately available to those on deck and ideal for offshore and island cruising. Forward of these, there will be two full length locker/settees that will double as bunks. We'll also be installing a sweet little wood stove to keep things cozy on foggy Nova Scotia (or Norwegian) evenings at anchor. 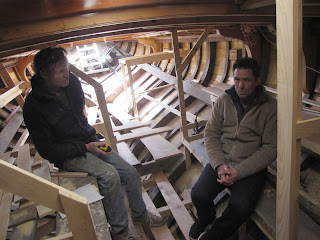 At the forward end of the cabin trunk, you'll have to duck around the varnished trunk of the bury of the main mast with a large double bunk on one side and two small bunks on the other. These will have curtains for privacy rather than partitions or hard bulkheads. Moving forward there will be a heavy duty work bench on starboard and an enclosed marine toilet and sink on port with full head room under the main hatch. Next there will be port and starboard lockers, the foremast and a V-berth up in the eyes of the hull. 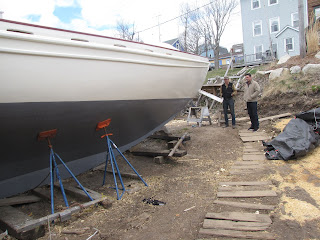 Billy wants to keep the vessel's Hackmatack knees and double-sawn Osage Orange frames exposed, while the steam bent White Oak frames will be covered with a smooth Alaskan Yellow Cedar ceiling.
It's most likely the below decks in schooner two will be nothing like this one. And that's as it should be. After all, these are custom built boats and the aim is to give the customer what he or she is looking for.
In the case of Billy's schooner, the rule is plenty of light and air ~ two things that are good for both wooden vessels and those who go to sea in them. 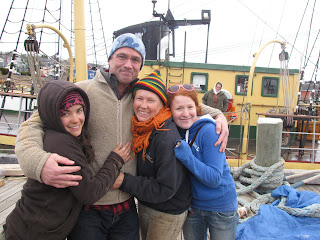 Posted by The new Lunenburg Schooners at 8:16 AM